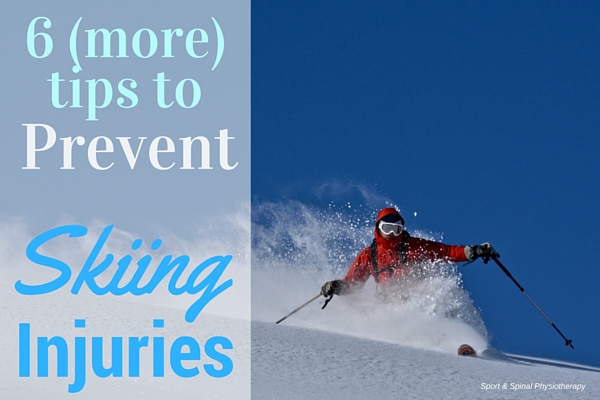 How to avoid skiing injuries this snow season. This post is Part 2 of our Get Fit to Ski series. You can read Part 1 Here.

Well the ski season in Australia is upon us and by all accounts we are looking at a great season ahead. If you’re heading down to the slopes this season, don’t let skiing injuries ruin your skiing season. Here I’ve outlined how to look after yourself when you’re down at the snow including warming up with stretches, improving technique and looking out for hazards.

One of the best ways to avoid skiing injuries is to warm up. Once you are at the snow at the snow, take some time to warm up adequately. I don’t mean get a hot chocolate before you start skiing. If you’ve sat in the car for a long time on the way up to the snow, then it doesn’t make sense to tear straight down the steepest run as fast as you can. A smarter option is to gradually increase the speed and dynamic nature of your turns over 2-3 runs.

This is similar to if you were to play touch football on a cold winter’s night.  You probably wouldn’t go straight from the car to sprinting up and down the sideline. I also like to put in some light “on snow” stretches after the first run or two once the muscles are feeling warm, but don’t try these unless you are pretty confident on skis. If in doubt the same stretches can be performed without skis on. 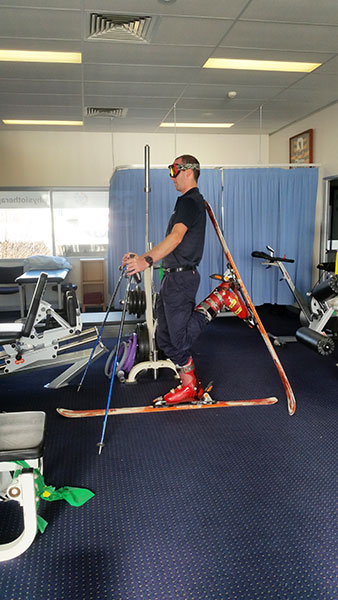 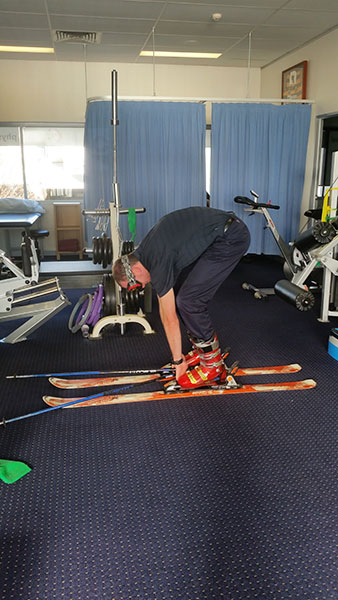 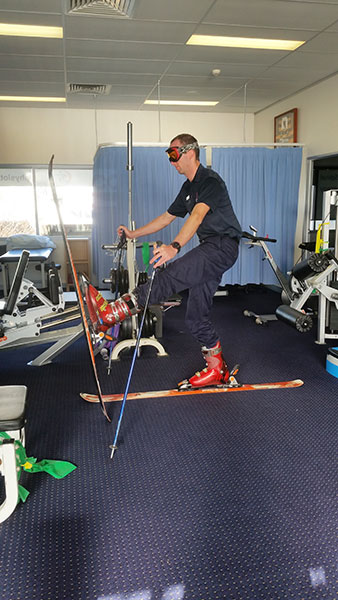 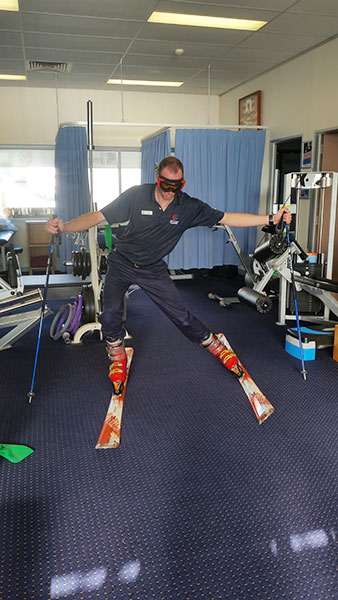 Don’t forget to have a light warm up again after stopping for lunch if you’ve cooled off. I personally have been caught out hitting a large bump at high speed skiing down a relatively easy run post lunch which sadly resulted in a torn hamstring.

It seems obvious, but lessons help you ski better. I’ve been skiing for a long time, yet still find it useful to have a qualified instructor pick me to pieces for the sake of improvement. With improved technique there is less stress on the body. You can then rely on good technique to get through anything difficult, rather than pure strength. Not only will this make skiing more enjoyable, but you’ll also be less tired at the end of the day.

One of the most common mechanisms of getting injured at the snow is related to flying through the air, whether it be deliberate or accidental. If you are going off a jump, check where you are landing – is it flat, is it downhill, is it uphill? I personally wouldn’t want to land many jumps on a flat surface, definitely none on an uphill slope.  How far is the land slope on a jump?

I’ve seen many injuries ranging from broken feet to fractured spines due to landing too short or too far off a jump and missing the landing slope. The bigger the jump, then generally the bigger the consequences of getting it wrong. If you aren’t sure how fast you should be hitting a jump, have someone else pace you in.

Jamie has previously posted a blog on the effects of dehydration on the body.  Obviously dehydration has an adverse effect on the performance of our muscles. This can, in turn, put you at further risk of injury. Also, there is a detrimental effect on our cognitive performance,  as shown in this study on Cognitive Performance and Dehydration.

Considering there are so many split second decisions made in skiing, decreasing your brain capacity is a good way to end up doing something risky whether it be intentional or unintentional. Obviously risk is part of the fun of skiing but it is much safer to be able to assess that level of risk with a clear non fatigued or dehydrated head.

There is a saying that you can ski 4 types of snow in one turn in Australia. Icy conditions can pose some dangers due the edges on the skis not holding the snow and some extra care needs to be taken when this is the case. Strangely fresh snow can also be troublesome. Australia can, at times, get quite wet snow due to our relatively warm winter temperatures.

Wet snow is very hard to turn in as the skis will sink down into it making it very easy to catch an edge. I’ve seen multiple knee ligament injuries from this occurring but also injuries where skiers can’t turn as quickly as they expected due to the wet conditions and end up hitting a tree, rock or another skier.

Well done, you survived the day. Are you skiing again tomorrow? If the answer is yes, then a few stretches wouldn’t go astray. Stretching has been proven to decrease the muscle soreness you feel the day after exercising. I’d focus on the main muscle groups in the legs including the calves, quads, hamstrings and glutes.

Hopefully that helps you have a safe and happy ski season!

If you are interested in a ski fitness assessment, please contact us on 6262 4464. We currently have a great Get Fit 2 Ski special on. 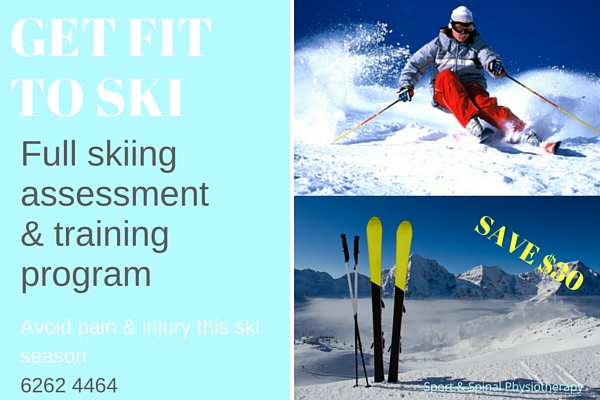 Are You Drinking Enough Water? Find Out How Much You Need