Pilates and Yoga are currently on-trend in the health and fitness industry but are often thrown into the same basket. The dedicated enthusiasts of each discipline would argue that they have very different benefits and swear that their form is far superior to the other. This statement is both true and false. True in the fact that they have different benefits, but false in that fact that one is superior to the other. Both can play a role in improving your health, fitness and well-being, depending on your needs and what you want to gain from the class. 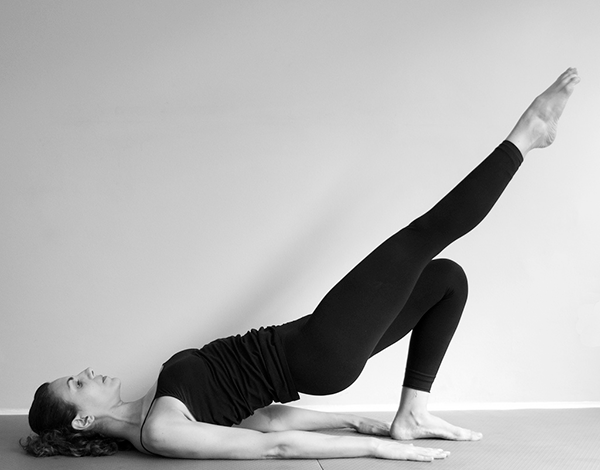 Yoga V Pilates – What are the Differences? 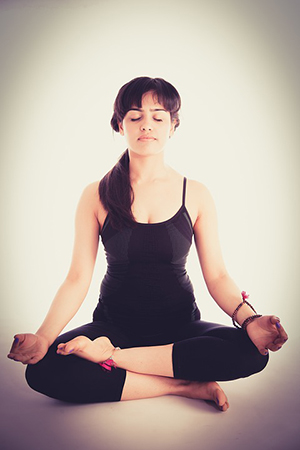 Number 1: The Origin of Yoga and Pilates

Yoga can be dated back as far as 5000 to 10000 years with evidence of Yoga postures being transcribed on objects as old as 3000 B.C. But since it’s origin in India the poses and postures performed have been altered, varied, with new postures added and many removed.

Since its’ beginning,  different cultures have individualised the practice to suit their beliefs and values. Nowadays, many  different practices exist including Vinyasa, Hatha, Yin, Bikram and Hot Yoga.

Pilates is much newer to the scene, having only been developed early in the 20th century. Pilates was  created by a German fitness guru by then name of “Joseph Pilates”. Joseph was born in 1880 and suffered from many illnesses that were common at the time. As he became older Joseph dedicated his life to devising and implementing an exercise regime. This regime helped him transform into a man seen as the “ideal of a man balanced in mind, body and spirit”.

There are two main forms of Pilates. Pilates Matwork is a series of exercises performed on a mat.  Equipment Pilates is performed on spring-loaded resistance machines, known as reformers, as well as other small resistance type equipment. 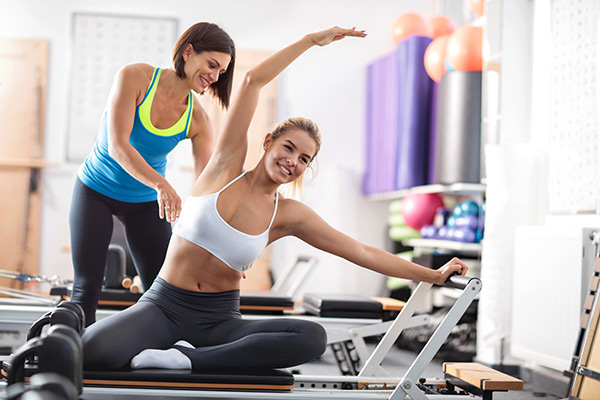 Number 2: The focus of Yoga and Pilates

Both Pilates and Yoga are focused around the physical connection between the mind and the body.

Pilates aims to bring your minds awareness to your physical presence through small movements. These focus on the deep core stabilisers of your back, abdomen and gluteals. This will improve your alignment, posture and the stabilising strength of your whole body. The ultimate aim of this is decreasing your current pain and future risk of injuries.

Yoga brings in a third element  – your spirit. Yoga focuses on connecting the mind, body and spirit through postures and breath.  Each breath/movement can be combined and altered in each class. Meditation is often a key component of Yoga. Meditation aims to increase your spiritual awareness and appreciation of one’s self. Yoga is also simply a great way to increase your flexibility, mobility, and strength.

So, Which One Is Right For You?

Both Pilates and Yoga could play an excellent role in your health and well-being but the ultimate decision depends on exactly what you need out of your class. Of course, combining the two is always an option and would mean you get the best of both worlds!

I will be breaking down the benefits of each in terms of strength, flexibility, mental well-being and spinal health. This may help you decide the best option for you.

Strength Benefits of Yoga and Pilates

Through sustained postures in Yoga classes you build endurance in almost all muscles of the body. This is definitely not the main focus of a Yoga class- but it is a side-effect.

If your only aim is to improve strength –  Pilates is the option for you.

The whole aim of Pilates class is centered around strengthening your deep core stabilisers, as well as your gluteals, thighs and arms. This is performed through the use of both resistance equipment as well as your body weight. It is well documented that a Pilates class once per week increases overall muscle bulk, as well as abdominal and core strength (Tolnai, Szabo, Koteles and Szabo, 2013). 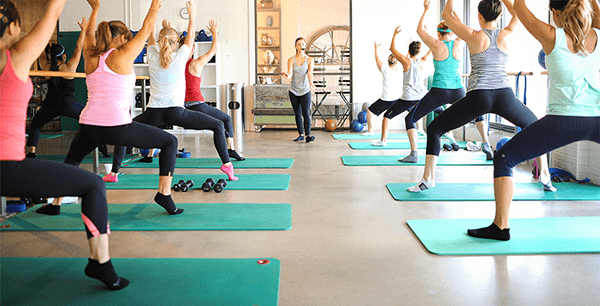 Flexibility benefits of Pilates and Yoga

Pilates certainly incorporates exercises to enhance your flexibility including stretches, foam rolling and sustained positions. These especially focus around the lower body and has been shown to have positive effects on flexibility (Tolnai et al., 2013). This, however is not the main focus of a Pilates class.

If your main focus is improving your flexibility –  Yoga is the class for you.

Yoga incorporates sustained postures and certain poses that focus on improving your flexibility. This is also well-documented with studies showing that a single Yoga class per week can significantly increase hamstring length (Amin and Goodman, 2014). 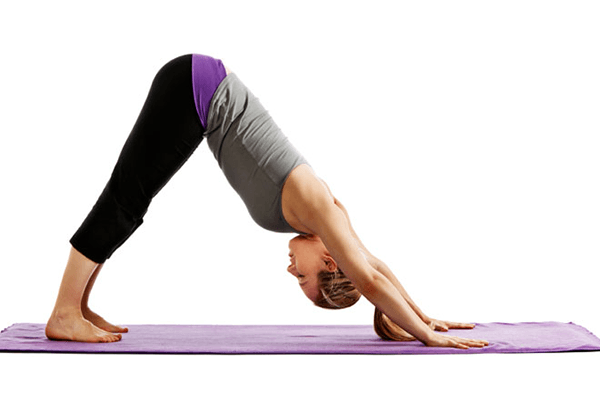 Pilates is a mind-body practice that encourages you to concentrate on your mind’s connection to your body, bringing a whole body awareness. Studies have shown that this helps to clear your mind of any distractions, forgetting current life-worries and brings about a sense of mental well-being (Mokhtari, Nezakatalhossaini and Esfarjani, 2013). However, Pilates doesn’t usually incorporate meditation within a class.

Yoga almost always incorporates some form of meditation within a class- be it the way most people know meditation, sitting with closed eyes with crossed legs, but yoga is also a ‘moving meditation’. The connection between movement and breath is the key focus of yoga. Meditation has been extensively studied and the benefits are numerous. These include a decrease in pain, anxiety and depression, as well as helping to treat insomnia.

If mental well-being is what you’re after – Yoga is the choice for you. 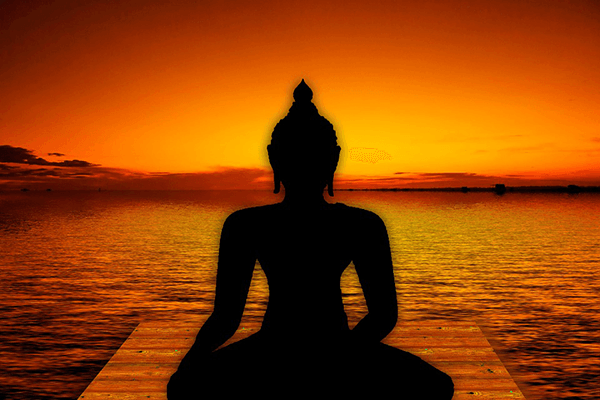 Back Health benefits of Pilates and Yoga

According to the Australian Bureau of Statistics 70-90% of our population will suffer from low back pain, therefore treating this a major focus area for health professionals especially physiotherapists.

Inflexibility often contributes to low back pain and as we’ve previously discussed Yoga improves spinal and hamstring flexibility – so Yoga can certainly benefit back pain sufferers. However, certain Yoga poses may be unsuitable, especially in the early acute phase.

Pilates main focus is on core, abdominal and lower back strengthening and has been studied extensively. Numerous studies have shown Pilates improves low back pain – even in those that have become chronic! If you are suffering from any low back pain Pilates is definitely the choice for you!

My Conclusion: Both Pilates and Yoga will have positive impacts on your health! If you’re still unsure as to which will be most beneficial for you, speak to your physiotherapist. We’re currently running Pilates Matwork, Pilates Reformer and Yoga classes so you have the opportunity to see class which works for you.

Mokhtari, Mahyar, Maryam Nezakatalhossaini, and Fahimeh Esfarjani. “The effect of 12-week pilates exercises on depression and balance associated with falling in the elderly.” Procedia-Social and Behavioral Sciences 70 (2013): 1714-1723.

Posted in Pilates
← Grand Opening Wrap upPost-natal Pilates: Is it right for you? →

Jenna graduated from the University of Canberra with a Masters of Physiotherapy after completing a Bachelor of Applied Science in Human Biology. Her special interests include the rehabilitation of sporting injuries, post-operative rehabilitation, women's health and pilates. Jenna is a keen hockey player and is a current member of the ACT Academy of Sport and represents for the ACT Strikers. Outside of work and training she also enjoys reading, knitting and surrounding herself with family and friends.

View all posts by Jenna Cartwright →