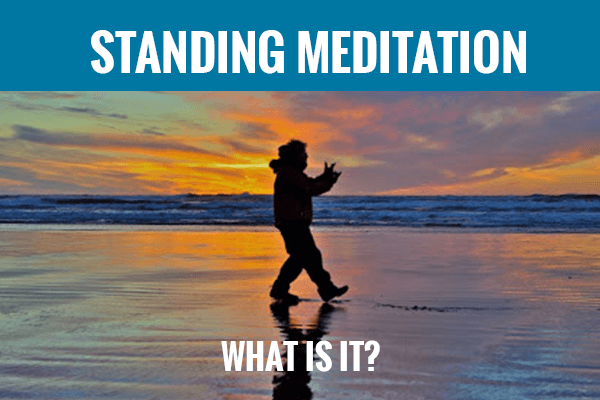 What is Standing Meditation?

Many people are unaware that meditation can help cure or manage illness. Standing meditation can also physically strengthen the body. Zhan zhuang has specialised knowledge of how this is done and can reproduce it to almost anyone.

Standing meditation makes use of five very specific standing postures to deeply release long held stress and tension. The legs, spine and shoulders become very strong yet relaxed. Unnecessary tension is released from the joints and muscles, making them more flexible and elastic.

Standing meditation makes use of specific relaxed abdominal breathing, use of mental imagery, and awareness of the inside of your body.

The Acupuncture Approach of Standing Meditation

The acupuncture approach of there being a close connection between emotion and the internal organs is also used. Standing meditation has an effect upon the body that mimics acupuncture, without the use of needles. In some cases it is even more powerful than acupuncture.

Zhan zhuang is comprised of specific physical and energetic skill sets. Each aspect of the training makes you better able to use your body.  This includes better power output through leverage and movement of the fluids inside your body ( blood, interstitial fluid, lympth and cerebrospinal fluid).

The Difference Between Sitting and Standing Meditation

The opposite is also true. Anyone living with chronic pain will tell you that any increase in stress or anger can flare up an injury. Science and research now also now supports this.

In Zhan zhuang the body doesn’t lie. If it is uncomfortable it will distract you. It will reveal to you areas of yourself that need attention and relaxation. Many of the obstacles that beginning meditators have are due to the excessive tension and discomfort that the physical body has.

Meditation methods that use purely mental constructs can lead the meditator into a mind space that is ungrounded and not useful in the everyday world. The moving and static aspects of Zhan zhuang target this problem from the first class.

People throughout the ages have commenced learning and practicing Zhan zhuang as a last resort for illnesses. Usually they were either unable to be diagnosed or were unresponsive to other forms of treatment. Theses pratitioners tend to be quite motivated to learn and practice diligently because of this ‘last resort’. As such, amazing results have been seen in such cases.

When learning standing meditation in China, one of my teachers met people in their sixties who had been crippled by rheumatoid arthritis only a few years earlier. The daily Zhan zhuang practise made them go completely into remission. They felt so good and young again that they stopped practicing. Within six months the arthritis returned. They recommenced practice and it went into remission again.

I have personally had students who have cancelled joint surgery for osteo-arthritis due it not being a problem any more. I have also trained a student who was able to dissolve chronic shoulder pain at will within three months of training. Later I was able to help dissolve the pain of a twenty year old with lumbar spine disc injury.

Additionally, standing meditation is a perfect entry point for anyone wanting to learn to meditate properly while healing and strengthening their body at the same time.

Who would benefit from Standing Meditation

This course is especially designed to help with conditions such as:

A typical class starts with gentle joint loosening exercises and practice of some standing meditation postures.

Detailed explanation of the exercises is given with light hands on partner work to tap into the nervous system more easily. Intergration of the learned material is once again practised.

Breathing training and tai chi walking meditation is also taught as a way of integrating the standing alignments into daily life.

Zhan zhuang is the first part of three pillars which form the foundation of Tai chi and Chinese Kung fu (martial arts). In China, Zhan zhuang is well known as a key component that helped produce some of strongest humans to ever live. Historians estimate that Standing meditation is 2700 years old.

The power of this practice is still as potent and useful as any other time in history. Within weeks of daily practice, practitioners of Zhan zhuang find that it positively enhances all aspects of their lives.

A noticeable positive energy and sense of contentment can be felt for hours after a practice session. One of the best things about Standing meditation is that just about anybody can do it!

Great results occur with just 10-15 mins of practice each day.

Look out for our Standing Meditation classes starting soon at Gungahlin!

This course has been designed by Senior level Tai Chi instructor Chris Radnedge who has been practising Standing meditation and Tai Chi for 20 years in both Australia and China. Chris is a Soft Tissue Therapist treating at Sport and Spinal Physiotherapy. He has 17 years of remedial massage experience in addition to extensive training in Tai Chi exercise modification for various injuries and the core internal power methods of Tai Chi known as Qi gong (pronounced: cheegong, literally: Energy work). Chris has a degree in Human Biology, an Advanced Diploma in Soft Tissue Therapy, cert III in Group fitness and is a member of the association of Massage therapists and the Tai Chi Association of Australia.

Chris has a degree in human biology from the University of Canberra in addition to an Advanced Diploma of Soft Tissue Therapy from the Canberra Institute of Technology. Chris has been working as a remedial massage therapist and soft tissue therapist since year 2000. He has a special interest in musculoskeletal conditions, such as neck and low back pain, hip pain, whiplash, headaches, and nerve injuries. He uses kinesiotaping as an effective adjunct to his massage skills. Chris also uses structural bodywork techniques for scoliosis (curvature of the spine), spinal joint dysfunctions and for minimising whole body compensation strategies. He has worked with elite athletes from the AIS and enjoys working in conjunction with our physio and podiatry team members to get the best outcome for our clients. When Chris is not providing great massages, he can be seen practicing and teaching Kung Fu. He also enjoys relaxing in coffee shops, lifting weights, practicing yoga or watching cat videos on YouTube.

View all posts by Chris Radnedge →