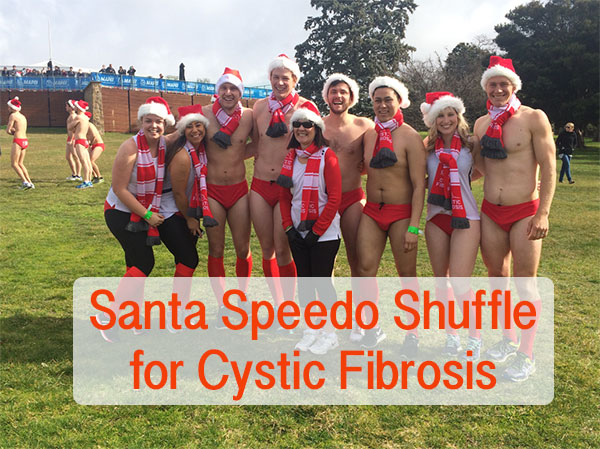 On Sunday 26th July 2015 the fourth annual Santa Speedo Shuffle for Cystic Fibrosis ACT was held at Lake Burley Griffin. This year was the biggest the CF Association of the ACT had ever seen with over 70 Santas committed to fundraising and parading around the lake in red speedos and a Santa hat, for 65 minutes. Before the shuffling began the fundraising efforts were just over $100,000. The total is now over $105,000 so needless to say; the event was a huge success.

I decided to join the event along with several of my friends and family members (over 30 of us in total) to help raise funds for the CF association ACT. The Santa Speedo Shuffle is the main fundraiser for the association, which supports Cystic Fibrosis suffers and their families in the ACT and surrounding regions. 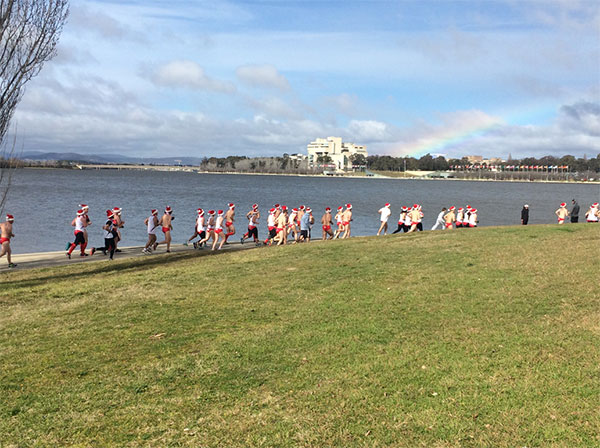 This was the first year that I had participated in the event and unfortunately, it was also the first year that the event had seen bad weather. With sleet falling and wind howling, our teams took off from Regatta Point and shuffled/walked/ran/froze our way around the lake. At the end of the 65 minutes I had made it around the lake twice, my skin was as red as my speedos and I was glad to see a towel with my name on it.

Our team, Dashing Through The Snow, raised over $14,500. We were awarded second highest fundraiser and won the prize of furthest distance covered. We ran to support the association who supports my son,  Dash,  who was diagnosed with Cystic Fibrosis at two weeks of age. My friends, family and I already have plans to run again next year and hope to raise even more funds and hopefully more awareness while we’re at it. 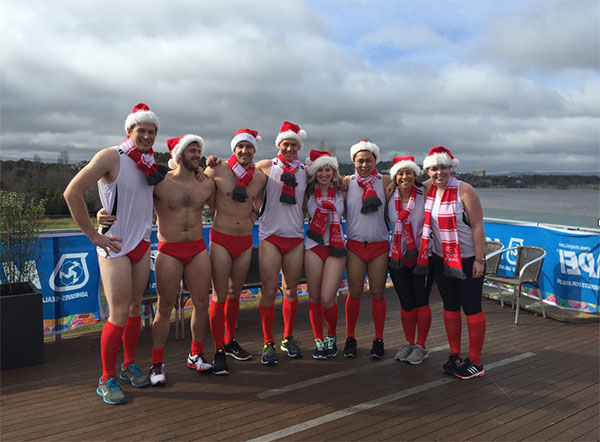 Are you brave enough to do the same next year and help support the great work of the Cystic Fibrosis Association of the ACT?

Nick graduated from the University of Canberra with a Masters of Physiotherapy after completing his Bachelors in Applied Science in Human Biology. Nick’s special interests include rehabilitation from sporting injures, management of work related injuries and functional strength and conditioning for injury prevention. Nick grew up playing basketball and has represented the ACT playing with the ACT Academy of Sport and the Canberra Gunners Academy.